The Scientic Research: an Overview

The ways in which processes of cultural change and creativity are triggered and work has been widely debated in social and human sciences. Many models have been proposed, and some of them even socially and politically tested. Furthermore, the debate regarding cultural encounter and cultural change has greatly increased and has been put at the centre of European political agenda after the incredible explosion of human mobility and multi-cultural cohabitation that contemporary societies are experiencing in what is now mostly referred to as “globalisation”.

The scientic aim of “Playing Identities” research team was indeed to provide an analytical overview of such frameworks, and develop them toward new innovative directions by referring to, and revising, existing paradigms based on the concept of creolisation.
The genealogy of this concept is complex, and its semantic eld varies greatly according to different historical, geographical, and cultural contexts. Since its transit from a disciplinary eld, i.e. that of linguistics, to social and cultural theory of the contemporary world, by partly disentangling it from its places of origin and its peculiar links to colonialism, mass displacement, and plantations, creolisation has thus become a widely utilised concept in the social and human sciences.

Under this respect, it has paralleled the trajectories of other terms, like hybridization, as metaphors good to think with about the complex cultural global dynamics. Indeed, the concept of creolisation, as an analytical tool, conveys a particular theoretical fascination. It seems able both to grasp those subtle processes of production of a third space in the eld of cultural encounter, as well as to explain the creation of new cultural constellations. As such, since its utilisation by Édouard Glissant – the inspirer of our project – and Ulf Hannerz – who has participated to it by chairing a series of seminars – its utility as an analytical tool has been widely discussed, and it has become an important and controversial concept in the works of many scholars.

It is thus by drawing on such literature and theoretical frameworks that the researchers involved in our project have tried both to offer insights into contemporary phenomena of cultural encounter from an European multidisciplinary perspective, and to test creolisation as an analytical tool and a methodological practice in order to address speci c problems through the analysis of diverse case studies.

As a team composed by researchers in many different disciplines (anthropology, semiotics, comparative literature, sociology, cognitive sciences, political sciences) and from different national backgrounds (Italy, Portugal and Slovenia were the three countries involved) we found a common theoretical ground by understanding “creolisation”, as suggested by Charles Stewart, as a restructuring of previous codes and meanings. We have thus look toward what Hannerz has de ned “the organisation of difference”, rather than toward a global cultural homogenisation, as many analysis of contemporary globalisation do. In this perspective, we have looked at centre- periphery relations at the same time as constitutive of a global discourse on which constructions of the Other/Alien are built, and as the continuum along which new spaces (cultural, social, political and artistic ones) are produced by the experiences of social actors.

Common re ections on migration and mobility, both of human beings and of meanings, have thus been the starting point for the researchers in order to elaborate a shared framework of analysis.
In this way, migration and mobility have become the background upon which the production of new cultural and social spaces through the continuous reorganization of borders has been looked for. Real or symbolic borders are signi cantly at the centre of most of the researchers’ works.
In fact, it is exactly through the re-con guration of their position that the possibility for the emersion of new identities and subjectivities becomes concrete. According to such perspective, the strategic shifting and stretching of borders allow individual or collective actors to recon gure spaces of action, borderlands, where to establish new rules, new roles and new identities, either for better or for worse.

Following such theoretical premises, we have been working on our respective topics always keeping in mind the insights and suggestions provided by the colleagues during the project workshops where our researches were presented and discussed. Therefore, methodology itself has become an important eld where to confront and elaborate the different disciplinary backgrounds in what can be prospected as a “creolised” approach to creolisation.

Furthermore, the on-going attention to the theatrical part of the project and to the performances produced in the various countries involved, has allowed us to bridge the often neglected gap between processes of social and cultural change and the individual or collective experimentations of new common spaces of creativity.

As a collective research enterprise, our work has been based on the one hand on multisided eldwork and participant observation – carried out in Slovenia, Israel/Palestine and Italy often with the collaboration of migration of cers, lawyers, architects, social workers, and activists – in associations for labourers and migrants, law courts, work places, and contested sites.
On the other hand, some of the studies draw on data obtained by the critical analysis of documents and literary and artistic objects whose thematic focus provides insights into dynamics of potential creolisation. The scienti c results of the project will be published with Cambridge Scholar Publishing in a collected work titled “Shifting Borders. European Perspectives on Creolisation”, edited by Tommaso Sbriccoli and Stefano Jacoviello. 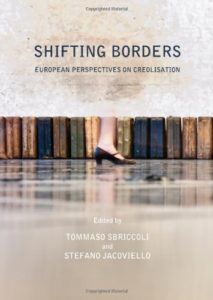 In the last few decades, creolisation has become a recurrent feature in the works of scholars from many disciplines, serving as a useful metaphor for understanding contemporary societies in a “world of globalisation”.

More than a metaphor, creolisation can be conceived as a powerful analytical and theoretical tool in order to grasp the current dynamics of intercultural encounter and conflict, allowing a close look at the production of new subjectivities and identities.

This volume thus has much to say about moving and mixing in our times, and shows in more ways how thinking about creolist and related notions can be very fruitful.