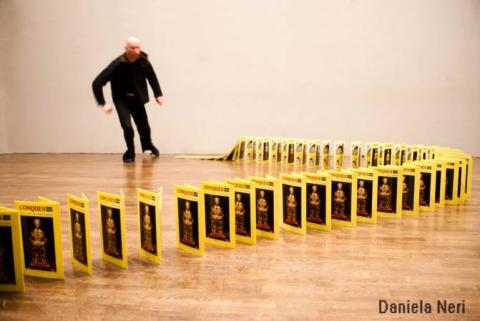 Conques, where the french step of the Creole Performance Cycle has been held, is the perfect place for a research into European identity. This village has a thousand-year history, tons of pilgrims and visitors came here from all over Europe. Besides the abbey church – the stained glass windows have been realized by the contemporary artist Pierre Soulages – Conques hosts the last intact liturgic treasure of France.
The five artists who worked on the performance decided to study the concept of “treasure”. They investigated the patrimonial aspect of this concept and also its role in the creation of identity. They search into the relationship between this concept and Conques inhabitants, as if this treasure would be still alive. So, during the artistic residence, the artists met the inhabitants and interviewed them about thier relationship with the village and the meaning of “treasure”.
The result of this interviews collection led to the performance titled “Archive of a living trasure”. This performance includes dance, singing, clownerie, plastic art and video.