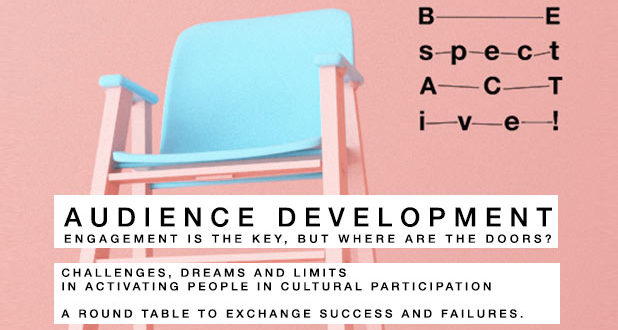 The Be Specatative! Project Annual Conference

On 22th and 23th November The Be SpectACTive! Project Annual Conference was held in Barcelona and was hosted by the University of Barcelona, which is also partner of the project.

Be SpectACTive! is a European project based on audience development, involving some of the most innovative European organizations working on active spectatorship in contemporary performing arts. Its members are European festivals, theatres, universities and a research center.

The two days event brought together professionals, practitioners, experts, artists, associations and organization in the field with the aim of debate the relationship between arts and participatory practices.

The programme was organized in a series of keynote presentations, held by experts and academic staffs that investigate the role of audiences in the artistic practices both by practitioners and festival organizers that told their experience and good practices.

Beyond the keynote sessions, the core of e SpectACTive consisted in series of participative workshops through which topics such the residencies, the artistic programming, the art management were encompassed with the challenge of actively involving the audiences.

In particularly, Playing Identities project was presented in the following workshops:

In these frames, the main points of interest provided by Playing Identities the arose debate the most among the other participant were:

At the end of the two days, in a plenary session, Ben Walmsley offered a series of tentative conclusions from an holistic perspective:

Playing Identities Performing Heritage at The Be Specatative! Coference in Barcelona.

Be Specatative! complex document Conference creole performance disconnection ethnic hatred Homofobia homophobia Identity or Death infographic Iveta Raulynaitytė kent Kilowatt Festival Lithuania Maria Cavali Mash-up metamorfosi migrant performance Performing Heritage Playing Identities Sadurní Vergés Siena teatro sociale theatre This Home Is Not For Sale Transilvania Culturala workshop
This project has been funded with support from the European Commission. This publication reflects the views only of the author, and the Commission cannot be held responsible for any use which may be made of the information contained therein.
© 2016 Performing Heritage • P.Iva 01387700527 | Cookie Policy